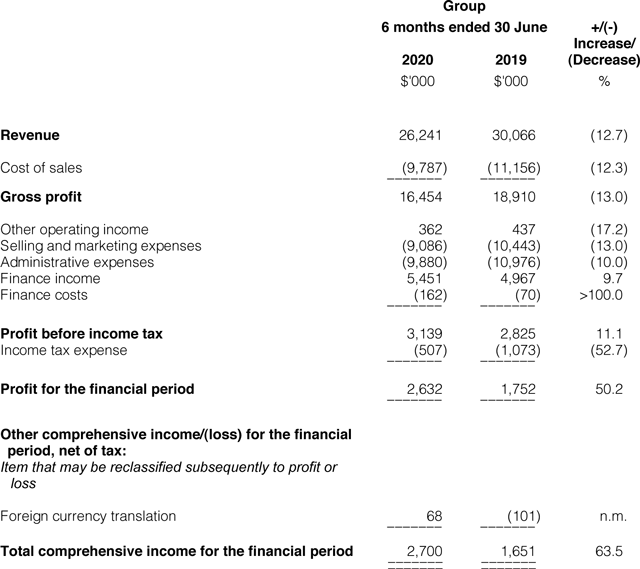 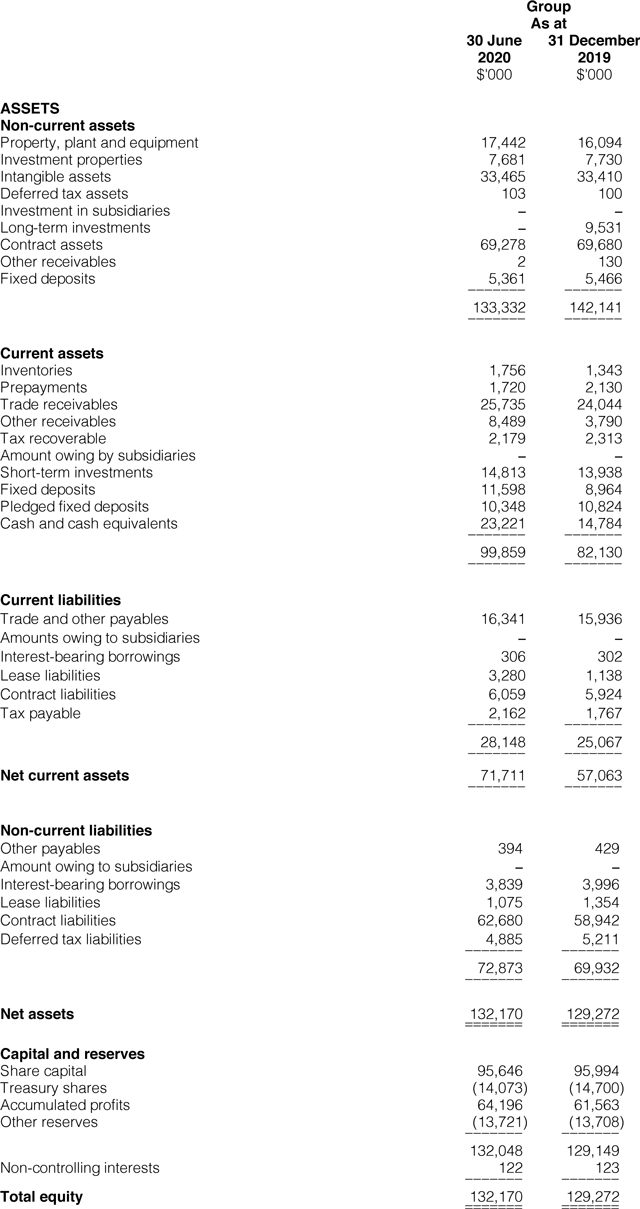 Although the Group's services had been considered essential and the core operations, with proper hygiene protocols in place, could continue, COVID-19 had affected the demand for the Group's banking services. Consumers were tighter with their spending, and in some of the regions that the Group operates, movement limitations and border restrictions has made service delivery even more challenging. This resulted in an 18.5% decrease in the new samples processed and stored from 13,000 in HY2019 to 10,600 in HY2020. The decline in new samples stored was mitigated by the conversion of more clients to higher value price plans mainly in Singapore and the Philippines.

The Group also ramped up its diagnostic service offerings, which grew 77% or S$0.5 million from HY2019 to HY2020. The increase is in particular from the increase in pre-natal testing services offered by the Group.

Cost of sales decreased by 12.3% or S$1.4 million in HY2020 compared to HY2019, which was in line with the decrease in new samples processed and stored. The decrease was partially offset a higher uptake of diagnostic services which led to an increase in the cost of sales.

Gross profit decreased from S$18.9 million in HY2019 to S$16.5 million in HY2020 mainly due to a decrease in new samples processed and stored. While there was an increase in diagnostic services which generally has a lower gross profit margin, the impact was offset by a higher proportion of clients opting for higher value plans in Singapore and the Philippines. As a result, gross profit margin remained relatively stable at 62.7% and 62.9% in HY2020 and HY2019 respectively.

The decrease in other operating income for HY2020 compared to HY2019 of approximately S$75,000 was mainly due a decrease in fair value on the short-term investments of S$147,000 from a gain of S$106,000 in HY2019 to a loss of S$41,000 in HY2020 arising from short-term investments held in Malaysia. In addition, the Group had received a grant income in HY2019 from Spring Singapore for its participation in a joint Executive Development Scholarship program with Spring Singapore. No such grant income was recognised in HY2020.

The decrease was slightly offset by government grants received in Hong Kong and Malaysia of approximately S$120,000 for COVID-19. There was no such grant income in HY2019.

Selling and marketing expenses decreased by 13.0% or S$1.4 million in HY2020 compared to HY2019. Advertising and promotion expenses decreased by approximately S$903,000 mainly due to restrictions imposed in various countries on physical trade fairs and antenatal seminars to minimise physical interactions in view of the spread of COVID-19. Nonetheless, the Group focused on online channels to continue to outreach and increase awareness of stemcell banking.

The decrease was mainly attributed to the decrease in staff-related expenses and share grant expense amounting to approximately S$712,000 and S$87,000 respectively in HY2020 compared to HY2019. In view of the impact of the pandemic on the Group results as well as safe-distancing measures, the Group has reduced employee activities and placed restrictions on the replacement of headcount lost through natural attrition. Due to the decline in revenues and overall performance of HY2020 compared to HY2019, the variable component of employee compensation had been correspondingly reduced.

With the imposition of tighter travel restrictions and to safeguard the well-being of employees, corporate travel expenses for management and oversight have reduced by approximately S$179,000 from HY2019 to HY2020. With the shift to telecommuting and digital communications, other administrative expenses such as printing and stationery, office consumables, postage and courier fee, maintenance and cleaning services decreased by S$242,000. Legal, professional and consultancy fees decreased by S$238,000 as the Group focused on the current business operations and took a prudent approach towards potential business opportunities.

Adjusting for the foregoing, the effective tax rate of 22.7% in HY2020 was lower than HY2019 at 31.3%. The decrease in effective tax rate was mainly due to the utilisation of tax losses carried forward from previous years for which no deferred tax asset was recognised.

As at 30 June 2020, the Group recorded S$17.4 million on its balance sheet for property, plant and equipment (31 December 2019: S$16.1 million). The increase was mainly due to recognition of right-of-use assets of approximately S$2.3 million and S$300,000 in HY2020 upon renewal of leases of properties and equipment in Hong Kong and Singapore respectively. The increase was partially offset by depreciation of S$1.4 million in HY2020.

On 1 February 2016, the Group subscribed for a Class A Redeemable Convertible Note ("RCN") maturing three years from the issue date in the principal amount of S$4.2 million from CRC. The yielding interest is at a rate of three month SIBOR plus 7% per annum payable annually in arrears. In June 2019, the Group signed a supplemental agreement to extend the RCN for another 2 years to 30 June 2021 on the same terms. As of 30 June 2020, the RCN and its corresponding interest receivable were being reclassified to other receivables, current.

With the aforesaid reclassification of RCN and sale of the unquoted shares, there is no long-term investment as of 30 June 2020.

Non-current contract assets represent all service revenues arising from the performance obligations identified under instalment payment plans in the cord blood, cord lining and cord tissue banking contracts that have yet to be billed to clients. Upon billing, the billed amount will be receivable under the same terms as the current trade receivables. As at 30 June 2020, the Group recorded non-current contract assets of S$69.3 million (31 December 2019: S$69.7 million).

Trade and other payables, current and non-current

Contract liabilities represent revenue received in advance for services revenues to be rendered under the various performance obligations identified in the cord blood, cord lining and cord tissue banking contracts. As at 30 June 2020, current and non-current contract liabilities were at S$6.1 million and S$62.7 million respectively (31 December 2019: S$5.9 million and S$58.9 respectively).

The outbreak of the COVID-19 in early 2020 has caused fear worldwide and resulted in a negative impact to the global economy. In all the countries that the Group operates in, the Group's services are classified as essential services and as such, the business activities of the Group have remained substantially operational. However, the implementation of social distancing measures to reduce social contact has resulted in restrictions on the Group's ability to carry out physical promotional activities in HY2020. To address this, the Group has ramped up its use of digital marketing campaigns, and has also conducted webinars in various countries to create consumer awareness of its product offerings. With shifting customer preferences away from face-to-face consultations, the Group has embarked on digital initiatives like e-enrolment to continue engaging potential customers in the current environment. The Group will continue to look into the potential ways in which it can engage its existing and potential clients via digital means, which will allow outreach to a potentially larger targeted audience.

In addition, tightened business spending resulting in reductions in selling and marketing expenses and administrative expenses, and the nature and timing of the Group's service delivery has slightly cushioned the impact of COVID-19 on the results for HY2020. The Group only recognises revenue from banking services upon service delivery, which is at the point when the customer gives birth and the sample is stored, while customers typically sign up a few months prior to their delivery. As the COVID-19 situation has generally resulted in the tapering of new customer sign-ups for banking services in HY2020, this revenue trend may continue in the second half of this financial year.

With recurring waves of the outbreak occurring in some of the countries that the Group operates in, the Group expects to continue facing uncertainties arising from COVID-19 in the coming months. Given the rapidly evolving circumstances, the Group will continue to monitor the situation closely and respond accordingly.

Notwithstanding the COVID-19 pandemic, the Group continues to emphasise on increasing public awareness of the benefits of stem-cell banking as well as to seek growth in its diagnostics business through continuous engagement with its clients and their broader families over their lifetime. It continued initiatives like offering additional testing services for cord blood banking to add value to its stemcell banking services while diagnostics offerings have seen relatively positive response from various markets despite the outbreak. With an increasingly technologically-savvy population and a paradigm shift towards digital transformation, the Group is also exploring digital healthcare to better service and empower clients, as well as reduce inefficiencies and costs in service delivery.

As at 30 June 2020, the Group's balance sheet remains strong, and the Group had S$65.3 million in cash and cash equivalents, pledged and unpledged fixed deposits and short-term investments in money market funds. Total debt as a percentage of equity was 3.1%. Although the Group persists in its desire for growth, despite a strong balance sheet and cash position, the Group will likely be taking a more prudent approach to new business opportunities in the near future in light of the current pandemic.